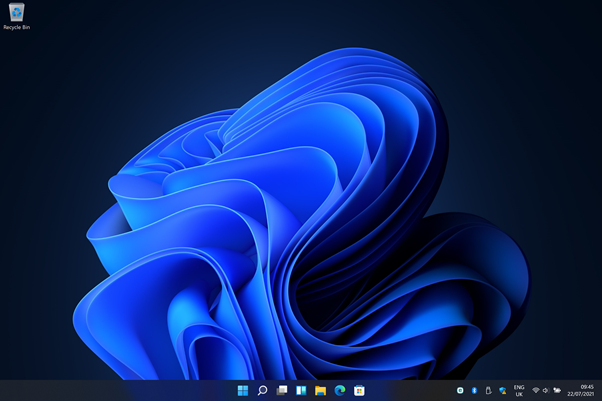 Windows 11 was announced via an online event on June 24th 2021 and the first build was released to Windows Insiders on the 28th June 2021.

The OS encompasses a lot of the new ways we find ourselves spending time at our PCs as a result of the pandemic, as well as how we are likely to find ourselves using our PCs as people enter a hybrid work environment.

The new OS brings a complete overhaul of design with a new start menu, rounded corners throughout the OS, new Action Centre flyouts as well as a new widget experience. I love the new design – everything seems cleaner, lighter and more pleasant to use.

Throughout the past year during the pandemic, we have spent more time on our computers, whether it has been working from home, learning from home, online parties or meetings. In a nod to the new way we have been using our PCs – Microsoft have done a  great deal of work on the Virtual Desktop feature, allowing you to configure multiple Virtual Desktops – so you can have a desktop for work, for play, for video conferencing, for being creative – for anything you want really!

Each desktop can be named and given its own desktop background in order to give the desktop its own unique look and feel.

It’s important to note that Windows 11 is now the most accessible version of Windows to date with accessibility settings being easily accessible and very clear within the Settings app. I’ve no doubt that the improvements made here will be improved on even more with feedback from Insiders testing the product.

You can find out more about Microsoft’s accessibility efforts at What’s coming in Windows 11 Accessibility | Windows Experience Blog.

If you’re interested in trying out the new features of Windows 11 and want to help shape its development – you can sign up to be a Windows Insider at http://insider.windows.com/